For almost a year, I was trying to convince myself that it was me, not Canon, not my camera that was not focusing correctly. I'd been a loyal Canon fan for over 11 years, why would I question their camera at all?! I tried with different lenses, none could focus consistently.

After much research, after talking to Canon tech support for a long time, I sent in my 7D and my 50mm 1.4 and 1.8 lenses to their Newport News, VA Service Center. They "fixed" my camera within a day, but sent the camera and the lenses to their shipping area and they got lost there after a week. They finally found them and ship them back to me. The letter inside the box said that my 7D's "Imaging Sensor Assembly and the AF Assembly were out of position" which was the cause for front focusing, back focusing, front and back focusing at the same time. They said nothing was wrong with my lenses, everything was set back to factory specification.

Besides the manual, here's an article their tech pointed me to on AF microadjustment:

Frustrated, I sent the 7D and the lenses back to Canon. They asked me to send them to their Newport News, VA location again. I did, and then I found out that my gear was shipped to their Irvine, CA Service Center instead. Asked them why, they said they did not have anyone with the expertise to fix my camera and my lenses in VA. 2 weeks later, got my camera and my lenses back. The 7D letter said:

On the lenses, they said:

So why did they send me back my 7D and the 2 lenses the first time around telling me that the camera was fixed and nothing was wrong with my lenses?!

I was hoping that everything was fixed this time. Excited, I whipped out my LensAlign to test again. I was disappointed again. Called up Canon, they were quick to say to send everything back in again. A tech told me to send him some pictures for him to examine, so I did. The following was what I sent him, tested with 7D and 50mm 1.4, all images zoomed in, like how LensAlign says on how to check the focus. Tripod, mirror lockup enabled, ONE SHOT, center AF point, remote shutter release, everything exactly the same, no change, nothing moved. 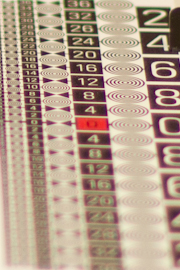 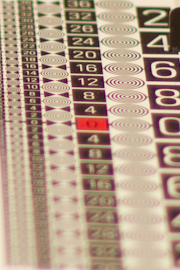 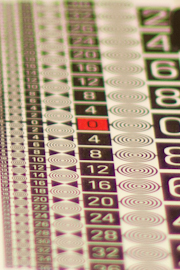 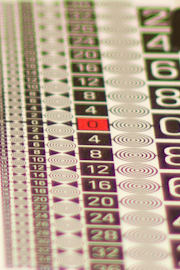 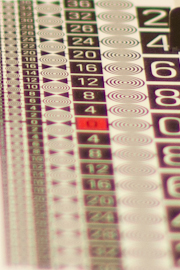 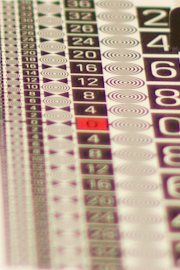 Sent the bigger version of these to Canon. They said these were all perfectly normal, all within THEIR margin of error, there's nothing wrong with the AF of the camera or the lenses at all. Seriously? Are they blind or am I blind? How wide can THEIR margin of error be? This is totally unacceptable. They say it's normal for a lens to refocus and have a different DOF every time you focus even though the AF point is exactly the same each time. So they're saying it's normal for the camera and/or lens to front or back focus randomly like my images above, that this is the normal behavior of a perfect camera and lens combination.

I can't even get a baseline, how do I do AF microadjustment at all?!

I took out my 85mm 1.8 to test since this was a lens they hadn't touched yet. I got 6 images in each set like how I usually do my LensAlign test, and all 6 images are pretty close, they are slightly different, so slight that sometimes I can't tell that they are different when I look again. So I can accept the margin of error there. However, my 85mm 1.8 is back focusing, so I need to move the focus to the front, I set AF microadjustment to -5. Took 6 shots again, 6 shots were pretty similar, I was okay with that, but the -5 was too much to the front, I needed to set it back a little, so I set the AF microadjustment to -3. This time, not only it did not move back, it moved to the front even more. Frustrated, I continued to test, but this time with -7, also took 6 shots each time. Going from -3 to -7 moved the focus to the back. WHAT?!

Here's the summary of the AF adjustment attempts (with the addition of the +7):

Yeah, I already told them that the AF microadjustment was funky the first time I sent my camera and my lenses in, but nothing was done to address that.

Testing with these 3 lenses, the focus ring would adjust each time I half press the shutter on the 50mm 1.4 and 50mm 1.8, but not so with the 85mm 1.8. On the 85mm 1.8, it would only focus the first time, the second and the third time, since the focus was already there, the ring did not move at all, which I believe is the correct behavior.

I just need Canon to check the AF on my camera, and fix the AF microadjustment, and also both my lenses. I think they were very close to fixing the camera this last time, I just need someone who is competent enough to completely fix it so I don't have to send it in again and again. Or just swap out mine with working units of the 7D and both lenses.

Camera and the 2 50mms just went back to Canon again today, I asked them to send me the label to send the package to New Jersey instead, with a new set of eyes, maybe they can figure out how to actually fix my camera and my lenses correctly this time.

All images were taken with Manual mode, raw, no processing done, just cropping and enlarging that area of the LensAlign tool.

Your product has been examined and it was found that the adjustment of the AF assembly was incorrect causing inaccurate auto focus from time to time. Electrical adjustments were carried out on the AF assembly and product functions were confirmed. Adjusted exposure & focus with lens, cleaned C-mos and checked all factory specs. Updated firmware.

The last firmware update was released on 4/25/2011 and they said they already updated the firmware the first time I sent it in, but they did it again?! And the adjustment of the AF assembly was incorrect again?! How many times could they have adjusted it wrong so they had to readjust again?!

They gave the same Service Details on both lenses: "Adjusted back focus with body, checked factory specs."

I briefly tested my 7D with the 50mm 1.4. Got some consistent shots as well some inconsistent ones. Since the lighting was inconsistent (light from outside as well as inside), my test results were inconclusive. Of the "consistent" sets of 6 shots, I adjusted the AF back because it was front focusing, and even with a +20, it wasn't quite right.

I will do more LensAlign testing when I have more time in a few weeks. From the little testing I did, I'm not sure if the camera was fixed or if there's something still wrong with the lens. I haven't tested the 50mm 1.8 yet. Am very tired of Canon right now, need a break...
Posted by Black and not Pink at 8:32 PM